Attorney Joseph Selinger was recently elected as President of the New London County Historical Society (NLCHS) at their annual meeting held in September.

Attorney Selinger was drawn to the Society because of his love of history, specifically, the intricacies of New London County’s history. Take for example the building the Society operates out of. This pre-Revolutionary War mansion, now known as Shaw Mansion and located in the city of New London, served as headquarters for Nathanial Shaw. Shaw was the commander of Connecticut’s fleet of privateers during the Revolutionary War and hosted many key historic figures at the mansion, including George Washington.

Going forward, Attorney Selinger hopes to advance and expand on three areas of the Society. First, to develop more public programs, with the aim of educating both children and adults on the history of the towns, cities, companies and institutions within New London County. Second, to increase the Society’s community involvement and outreach to smaller towns in the county. And lastly, to expand the videography program started by Executive Director Steve Manual. 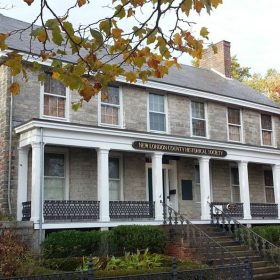 One such public program already in the works is their Annual Thames River Cruise. For the last eight years, the NLCHS has organized a cruise down the Thames River aimed at bringing the history of New London County to its residents in a social setting.

“I’m excited about the upcoming October cruise from New London to Norwich on the Thames River. The wine tasting and foliage are always fun, but this year we have historians from the Coast Guard who will speak about the role of the Coast Guard in World War I, which should be fascinating,” said Attorney Selinger.

The NLCHS was founded in 1870 and is the oldest historical organization in the county. The society’s main geographical focus has been on the cities spanning the Thames River connecting two commercials centers, New London and Norwich.