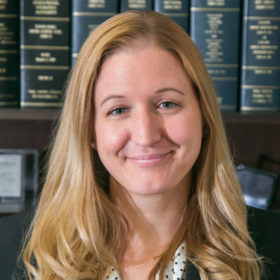 Emily joined the firm of Tobin, Carberry, O’Malley, Riley & Selinger in 2013. She has worked in the Healthcare law section of the firm for eight years and represents thirteen client hospitals. Since the implementation of the Official Connecticut Fee Schedule for Hospitals and Ambulatory Surgical Centers in 2015, Emily has represented her clients at many hearings before the Workers’ Compensation Commission on the issue of the correct reimbursement of hospital bills. Prior to joining the firm, Emily worked as a consultant for Immigration and Customs Enforcement (ICE) in connection with a criminal investigation conducted by the Southern District of New York of a suspected major stolen antiquities dealer. From 2004 to 2009, Emily was a contract archaeologist and worked as a crew chief for a cultural resource management firm.

Emily is a resident of Groton where she lives with her husband and daughter. She currently serves on the Board of Directors for the New London County Historical Society.She previously served on the Board of Directors for the Boys and Girls Club of Southeastern Connecticut and the Avery-Copp House Museum.She is active with the Yale Alumni Association and is a member of the Young Professionals of Eastern Connecticut.

In the news: Attorney Casey