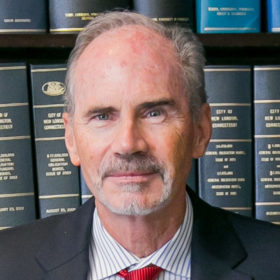 Jerry served with the Chief State’s Attorney’s Office in Connecticut for five years prior to joining the firm in 1983. While there, he was principally responsible for prosecuting white-collar crimes. He has successfully argued before the Appellate and Supreme Courts of Connecticut, tried numerous cases in state and federal court and has defended clients before state agencies in regulatory proceedings, including the Department of Labor, Department of Revenue Services and Department of Consumer Protection.

In addition, Jerry has extensive experience in the mediation and arbitration of disputes, ranging from employment discrimination and intellectual property matters to uninsured motorists and construction claims.

Residing in Mystic, Jerry has served as President of the Mystic Community Center. He also was on the Board of Directors for the Mystic Marine Life Aquarium, the American Heart Association and the Stonington Charter Commission. From 1994-2006, Jerry served as New London County Co-Chair for Connecticut Legal Services’ annual Campaign for Justice fundraiser. This campaign is the principal fundraiser for Connecticut Legal Services, which allows the organization to continue providing free legal service to those in need. Jerry also campaigned annually on behalf of the Ocean Community YMCA in support of its programs fundraiser and regularly provides pro bono advice to social service non-profit organizations.

In the News: Attorney O'Malley