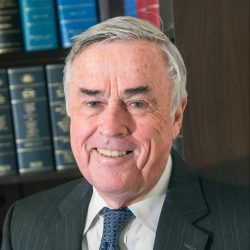 Mr. Tobin joined the Firm in 1968 and became a partner in 1970. His involvement in a number of prominent cases at both the state and federal level during this time helped to expand the Firm’s litigation practice. Today, he practices extensively in the areas of corporate, commercial, gaming and Indian law, appellate, personal injury and wrongful death and general litigation. Mr. Tobin has lectured before the Connecticut Bar Association and is a Connecticut Superior Court Trial Referee.

In the News: Attorney Tobin